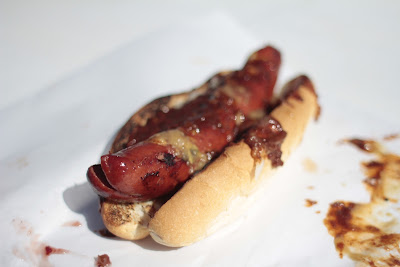 I'm glad that I went to Boston Speed's Famous Hot Dog Wagon with my bro. I had high expectations due to the reputation (#1 in America), and was not let down.

This Hot Dog Wagon is located at 42 Newmarket Square in Roxbury, MA. Maybe the armpit of Boston? Grimy triangular warehouse parking lot located between 93 and Mass Ave. Complete with blowing debris on a windy day. I seriously saw a tumbleweed among the plastic bags and dust.

I got my hot dog Loaded per the chefs recommendation. Fully Loaded. This Wiener was packin' heat. Mustard. Onions. BBQ sauce. Some kind of Pepper Relish. And a special beanless Chili sauce. Hot sauce too? What a mess. A delicious mess. Yes. Yes. Yes! You can see in the pic that the paper was a mess before eating. It was far worse at the end.

Tip: you NEED the paper to eat this thing.

It came on a nicely grill-toasted sub roll. This wiener was BIG. Half Pound. Not the biggest wiener I have ever seen though. That record is kept by Jaxson's of Florida. Trust me though Bigger does not mean Better. Jaxson's can send you to the hospital.

The Speed Dog was exceptional.

According to the internet, they used to use Pearl Frankfurters but have switched to a supplier from Connecticut. The wiener was spliced down the center. Marinated as well. Juicy. Not sure if the marinating added to the taste under the over Load of condiments. Maybe I'll try a more scaled back wiener next time.

I will go here every chance I get. Whenever there's a need for speed. To get a fix of some premium Boston Speed. Etc.