Last weekend, I went to New York and Pennsylvania (with my lady friend) to partake in some Kaiju action, and of course there were hot dogs to be had. 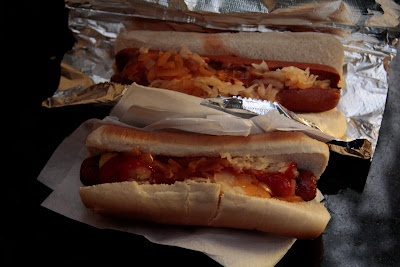 I picked up these dogs from a street vendor near the World Trade Center. I found the cart occupying Zuccotti (Liberty) Park with a Sabrett umbrella. I asked the man for a hot dog and he proceeded to place 3 sausages of varying sizes on the grill. He quickly told me the difference between the three and I ruled out the Italian sausage (that was the only one I caught) and had "one of each" of the remaining. I had him put "whatever-you've-got" on it which turned out to be: ketchup, mustard, shredded-cabbage-stuff, caramelized onions and raw onions.

The highlight was the bigger of the two wieners. This wieners was slightly lighter in color and sliced open down the middle. It had a strange texture-- almost like a veggie dog but a little more firm. Was it a veggie dog? It didn't have a typical meat feeling to it. It was almost lighter and fluffier. Either way I liked it. It was also much spicier than the other dog which was topped the same way. One might even call it a HOT! dog. 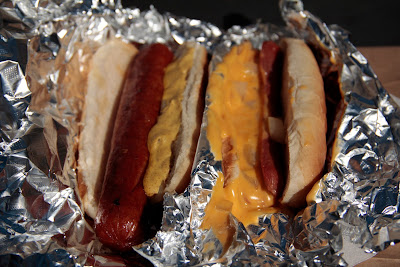 Part 2: Philly Cheese WHAT!?
I had always wanted to go to Bubby's Brisket and Bugsy's Weiners (yes, they spelled wiener wrong) when in Philadelphia, and this time around I "made it happen." Seeing Philly Dog on the menu was an instant choice. I also got the Special Dog (or I think that's what it was called) with mustard and onions. The Special was a BIG BEEFY BEHEMOTH and nothing more. The Philly Dog on the other hand was truly special.

They used a regular sized wiener for this combo. Split down the middle with Cheez Whiz and grilled onions. The creamy tang of the whiz went over nicely on a hot dog. Onions are almost always good. Only negative was the dog was a little lost in the cheese. Maybe a Special dog Philly style is the answer. There's always next time!